During a brief presentation, I learnt that the ABC is a registered charity which promotes Arabic culture, language and knowledge in the UK and aims to enhance relationships of respect, support and collaboration. In fact, it is one of the many organizations and entities in London that work in a variety of ways through a thick network, hosting events, organizing courses and promoting cultural initiatives. Events like this certainly bring people together in one place, people that come from the Arabic world, second and further generation immigrants, students and scholars, and people like me, with neither Arabic roots nor access to Arabic texts, with a terribly poor quality camera at hand (but I decided to leave the pictures all the same), that simply like to steal little pieces of stories and at least try and comprehend some aspects of the complicated World.

The event kicked off with a beautiful overview by lawyer and writer Selma Dabbagh, displaying some quotations on a projected slide and debriefing on the concept of dominant history written by the winners as opposed to the multiplicity of the stories do not fit into one single truth.

I have stolen one quote by Palestinian author Ghassan Kanafani:

Although we are missing a few good translations, on this occasion I got to know that Dabbagh’s books have been translated in Italian and she has spoken up at several events. 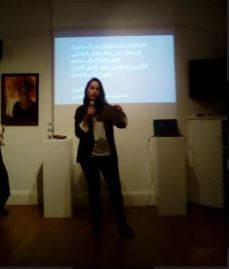 Jehan Bsesio was not a new name to me, I remember her poetry readings from the 2016 Palestinian Book Award with her shortlisted collection of poems I Remember My Name. She was born in Los Angeles, grew up in Jordan, lived in Lebanon and Egypt, she has worked for Médecins Sans Frontières.

Her poems warne against the misinformation and cultural misrepresentation of the mainstream media:

Don’t watch Al Jazeera.
Don’t listen to the BBC.
Make up your own mind, says Beirut graffiti.
(but, you left me, you really left me)

It’s been six years since I slept, Syria.

(This is my selection from Requiem for Raqqa)

Farah Chamma is a poet and performer, raised in Abu Dhabi, she studied in France and London. She involuntarily learnt about Palestine through the stories  that her mother passed on to her; and it was “involuntarily” because there wasn’t the intention to maintain such a strong bond with the place they there escaping from. But stories, even those very simple and unpretentious ones dusted off from everyday life, always carry a bit of political and social commitment. 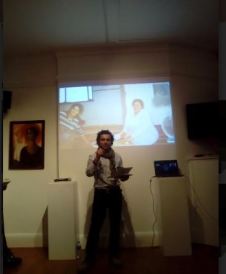 Then Ahmed Masoud reflected on some aspects on bringing up memories through the  senses and how the smell of traditional food can recreate remote objects and places, or at least create the sweet illusion of them.
Ahmed’s writing attempts to recreate the land where he grew up, so that those numerous Palestinians that are no longer able to go back may at least get enthralled by its literary imaginative reconstruction.
I met the writer among my readings some time ago, it was a beautiful page-turning book about a Palestinian child who decides to play the detective and find his father who had disappeared in reality under unknown circumstances (Vanished: The Mysterious Disappearance of Mustafa Ouda, 2015).  As a child who grows up into the repression of a sieged village, he inevitably gets trapped and involved into the political unrest of Palestine.

Next upcoming event of Palestinian literature. 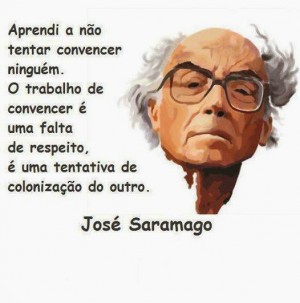